Why do I end up spending so little time putting words on paper, and so much time avoiding it? You would think I didn’t enjoy writing. I really do. Promise.

This weekend I was at a lake house in Texarkana, AR. It was lovely. I did extremely little. I talked with my 3 friends who joined me. Except for messaging with a handful of people, I unplugged. I LEFT MY LAPTOP AT HOME. It was rejuvenating.

On the way there and back, I listened to Felicia Day’s book, “You’re Never Weird on the Internet.” It is inspiring. I am now ready to Get Excited and Make Things, otherwise known as writing and crafting. It’s a welcome feeling, long missed.

And my house is clean. I like this place. I think I’ll stay.

I’ve published a new story. It can be found here: “Ask“. It’s erotica, and I’m not sure if it’s science fiction or fantasy, but it could be either. Sociology fiction? Something like that.

It’s always dicey, fetishizing slavery. It’s difficult to make dubious consent sexy. That’s one reason I kept this one so short. I might one day explore this world a little further, but I kind of like the flash-in-the-pan nature of the story.

I was once part of a writing group on Facebook that would discuss various aspects of writing. I should have assumed from the start that this would end poorly, eventually. Alas, in the immortal words of “They Might Be Giants,” I was young and foolish then; I feel old and foolish now. The question posed for debate at one point (which ended my involvement in the group) was, what responsiblity do writers have to try to be inclusive and representative of minority groups such as women, people of color, indigenous cultures, LGBT, etc.? To my immense dismay, the resounding answer according to this particular group was that “political correctness” had no place in the pristine imaginative fields of a writer’s mind. The writer should create their characters as they come to him, without “imposing variations” that do not naturally occur to them at the moment.

Well, that’s horse shit. Stories and characters may seem to come out of nowhere, sometimes appearing in all their entirety, as if the writer is not in control but simply a vessel, a receptor for the creative spirit. But any writer who’s been around the block a few times will tell you, when asked where their stories come from: “my own head.” And a writer’s head is not a pure place, oh my no. It is chock full of the insecurities, prejudices, misjudgments, ideals and fallacies of this strange little human. A writer’s head is full of nonsense and emotion and wild flights of fancy. If it wasn’t, the writer wouldn’t have much to draw from. Frequently it’s full of libido. (Not a bad thing.) It is not a place that should be romanticized, idealized, or protected from criticism and outside influence.

Now let’s look at those “variations.” Society is full of people who, in one way or another, have been treated like crap because one aspect of themselves is different. But the fact is, most people have some aspect of themselves that makes them different; it’s just that it’s something small for each person, unless they happen to possess multiple minority traits, such as a Jewish black woman in a wheelchair. Take a closer look at people, and you’ll see that most of us, in some way, are a minority, as backwards as that sounds. And the fictional world does not reflect this. Half the human population is female, but a much greater chunk of the population in the collective realm of fiction is male. America and the world have significant populations of people of color, but the fictional world is strangely white-washed. Just about everyone has some religious ideas, but when they come up in fiction, they are far more universally generic-Christian than otherwise. LGBT people make up a single digit percentage of the population, but in the fictional world, that decimal place moves at least one point to the left. And let’s not even talk about bisexual erasure or the Kinsey scale. A great many people have some sort of physical or mental disease, handicap or condition, that strangely never seem to afflict fictional characters unless it is the crux of the story.

The reason this is important it two fold. One, if a writer’s aim is for their story to be rooted in reality, their characters have to be as much like people as possible – and the default model human is not white, cis, healthy, prime-aged American male. That’s actually a much rarer model than you would think. People come in varieties, and making a character female or Hispanic or disabled is not “putting a variation upon the base model”, and it’s not catering to the irrational demands of a political feel-good group. It’s just making a human. Humans are variable, and characters should be also. Are all your characters brilliant? Sassy? Badass fighters? Computer illiterate? Have lovely singing voices? No, of course not. And they shouldn’t all have the same body, either.

The other reason to diversify characters is for the sake of representation, which is a GOOD THING. To a normal human who is not a white, cis, healthy, prime-aged American male, it can be disheartening, disappointing, even heartbreaking, to not see someone like themselves in the stories they love. The message is, “People like you don’t belong here.” It’s sad, and it means popular media is missing out on story and characterization opportunities for the sake of appealing to the lowest common denominator. Change up the bodies and cultures of your characters to more closely match that of reality, and you’ll actually appeal to a larger market.

For the record, I have just as much love for the white, cis, healthy, prime-aged American male as I do for any other subsect of human. Tony Stark is … omg … just … seriously, let me catch my breath. And I identify very much with Steve Rogers. But it shouldn’t be the default model for everyone, and there are no more “token” characters than there are “token” people; it’s a straw man argument. The default model should be a human, and the variation factors on top of that – race, sex, background, history, personality, skills, gender identification, bank account, sexual orientation, literary taste, BMI – should vary just as much as they do in real life.

You’ll be a better writer that way. 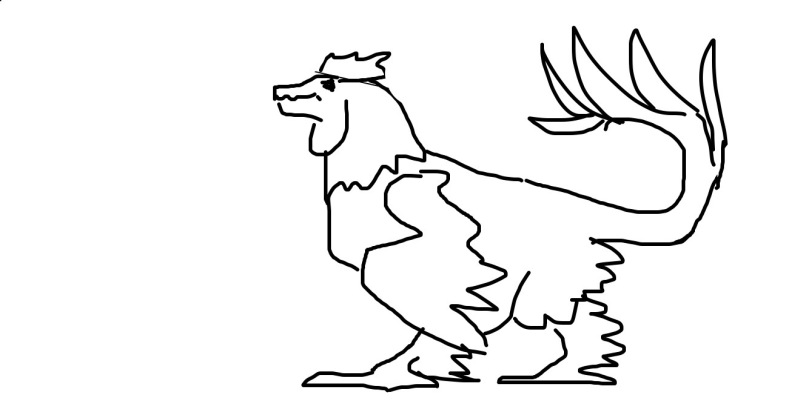 I wanted feathered dinosaurs in “Jurassic World.” But no, we got scaly dinosaurs. Then I heard that Dr. Horner supported re-activating the genes in chickens that gave them toothy snouts instead of beaks, long tails, hands instead of wing bones. Chickens, dino-activated! And thinking about that animal, I can tell you why they didn’t use something like them in the Jurassic movies.

Chickens are not scary. Their behavior is decidedly predatory; they stalk, attack, rend and share their prey with their mates and chicks. I have seen them be as vicious as any small predator. It’s not a side you usually think of for them. I have battled roosters, backed off of furious hens when I disturbed their chicks, and taken a couple to the butcher when they were too dangerous to a small child. But they are still chickens, still hilarious, still ingrained in our subconscious mind as being as harmless as a squash.

Dinosaurs look like alligators, crocodiles, those non-domesticated predators with no “harmless”, absurd comparison. They make for a better threat. Even the giant Moas of Australia (New Zealand? Pacific rim islands?) don’t actually look scary, because … well, because they look too familiar. So I get why they kept em scaly.

But it seems to me another movie needs to be made, with these chicken-dinos, and the poor humans that have to watch out for their ankles …

They make me so happy. Before me are aisles upon aisles of human minds to peer into, like jars with brains inside, all ready for me to hook my own brain to and see the people and words and places those brains once held. Luckily, books smell better than formaldehyde.

So I suppose I represent the outlier that corrects bisexual erasure on the bell curve. For practical purposes, it will just be easier if everyone is bisexual. Besides, if anyone is transgender and transitions from one sex to the other, or is a shapeshifter, or magic, their orientation doesn’t change when their bodies do. They’re still bisexual!

Or pansexual, depending on reasons. Though I maintain that, being a satyr, Luke is really the best Pan-sexual. Heheheheheh, I regret nothing.

Fan Fiction
Back to top
Julie Behrens' Writing and Design
Blog at WordPress.com.